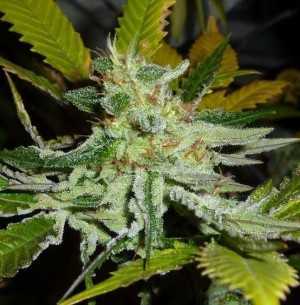 The Clockwork Orange strain is named after Anthony Burgess’s 1962 darkly futuristic novel about a broken society which was a cult screen hit for director Stanley Kubrick in 1971. Clockwork Orange is an Indica dominant strain whose origins are murky, although it probably contains genetics from G13 and Black Widow. G13, it has been alleged, was developed by either the FBI or the CIA, or both, in the early 1960s. That it’s an exceptionally strong weed is an undisputed fact.

Clockwork Orange weed has an earthy aroma with a hint of strong black coffee. When you light it up, you’ll taste exotic herbs and spices. The high combines a physically sedative sensation with mental stimulation and a feeling of euphoria. Medically this weed can help with muscular pain and appetite loss.

Clockwork Orange seeds produce plants that grow between one and two metres tall. The large leaves, which can be as wide as 50 centimetres, often display crinkled edges. This genetic aberration has no effect on the quality of the weed. The plants tend to grow with a single large cola and the THC level is around 15 percent.

Because of its massive leaves, this is not a strain to grow with the SOG method. Indoors, it will thrive with hydro or soil. Flowering time is eight to 10 weeks and yields are in the average range.

Outdoors, Clockwork Orange weed will only thrive somewhere with a climate at least as warm and sunny as the Mediterranean.

The Clockwork Orange strain is easy to grow so it’s suitable for novice gardeners. Although it’s Indica dominant, it offers a high that combines the best of Sativa and Indica characteristics.