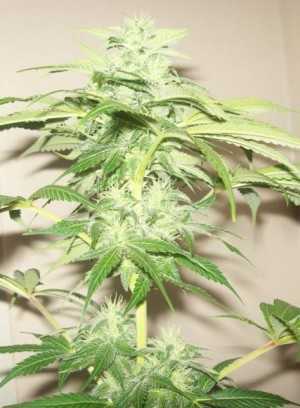 Ed Rosenthal is a highly respected cannabis grower, campaigner and author of books on cultivating marijuana, so it’s only fitting that this very special strain is named after him. Ed Rosenthal Super Bud is Indica dominant and contains genetics from a round-the-world tour of strains from north India, Afghanistan, South Africa, Thailand, Jamaica and Mexico.

The Ed Rosenthal Super Bud strain has a strongly sweet and fruity aroma and this continues in the flavour with the addition of exotic spices. The high comes on rapidly as a soaring body stone combined with highly active cerebral sensations – this is one of those weeds that lift you towards the sky rather than sending you to the sofa. In medical use, this weed is recommended for muscular pain and stress.

Ed Rosenthal Super Bud seeds produce medium sized plants that grow to between 110 and 140 centimetres tall with bright green leaves. The buds are fat, heavy enough to bend the branches and covered in glittering crystals and short hairs. THC levels are in the 15 to 20 percent range.

For those that live in temperate regions, this strain is best grown indoors where it will do well in either soil or hydro. Flowering time is eight to 10 weeks and with careful gardening, you can expect to get high yields.

You can grow this weed outdoors in regions at least as warm as the Mediterranean and it will tend to stretch more than it does indoors. The plants will be ready for harvest in late September or early October in the northern hemisphere.