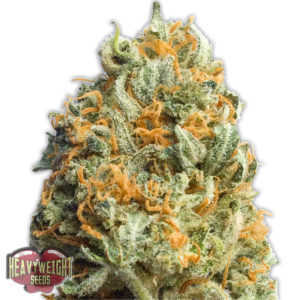 After occupying themselves with creating a new autoflowerer capable of meeting their high requirements, Heavyweight Seeds finally revealed their new wonder-strain to the world in the form of Fully Loaded Auto. Earning itself a glowing reputation for its fine properties, Fully Loaded Auto quickly climbed up the ranks of quality cannabis to become one of those rare strains that prove autoflowerers can offer just as much as their non-auto counterparts.

The strain was created by taking a classic skunk and crossing it with the highly-regarded Wipeout Express, giving Fully Loaded Auto the kind of genetic clout that justifies its heavy-duty name.

Fully Loaded Auto really is the kind of strain that will be disliked by few, enjoyed by many, and loved by most. This is largely due to its well-balanced hybrid genetics, being 60% indica and 40% sativa. Such a mix is always good for those who wish to seriously relax yet keep moderately alert and active if needed.

This combination of properties can give Fully Loaded Auto a great social quality that is happy to remain dormant until it is needed, allowing you to sink into a tranquil pit of serenity until your interpersonal faculties are required again. Such benefits of the strain may in part be due to Fully Loaded Auto’s mood enhancing properties, with the sociably beneficial qualities being a natural result of the upswing in your mood. These sativa-inspired effects are also what keep the strain from being a simple couch-lock affair, pairing the typical sativa sedation with a sprightly mental energy. The hefty strength that powers these effects should not be underestimated, however, with Fully Loaded Auto offering a potent 20% THC level. Entertaining it may be, but newbies may want to watch their drag-count here.

The taste will be a treat for skunk fans as everything about its scent and taste is totally skunky. Thankfully for those who can’t get enough of it, the plant is extremely generous in its yields for an autoflower. As much as 600g per m2 is available from an indoor setup, while outdoors the strain can provide 50-60g per plant. These are top quality yields too, with the bud being simply coated in trichomes and resin, delighting those with crystal catchers and filling those with blunted scissors full of dread.

Fully Loaded Auto by Heavyweight Seeds, 4.0 out of 5 based on 1 rating