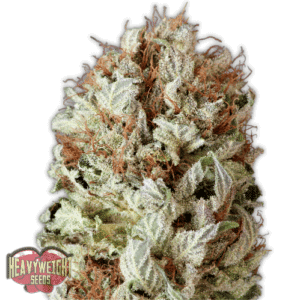 Heavyweight Seeds do not do things by half when it comes to naming their strains, and with Extreme Impact Auto they have continued this tradition in a typically muscular fashion. This is one powerhouse strain, introduced alongside five other weighty offerings to make a range that is as much an endurance test as anything else.

Thoroughly imbued with ruderalis genes, Extreme Impact Auto is the result of crossing Mazar Auto with Heavyweight Seeds’ flagship strain, Fast & Vast Auto. The result of this is a shamelessly indica titan with a knockout stone to challenge even the veteran smokers out there.

This is no exaggeration either. At 90% indica and 10% sativa with a 21% THC level, Extreme Impact Auto was always going to be destined for couch-lock and midnight takeaway pizza. It is true that certain other strains offer a greater THC level, yet it seems that despite this Extreme Impact Auto is still famed for its sledgehammer-force effects which seem to transcend that 21% figure. This may in part be due to the low CBD level of the strain, which measures only 0.6%.

Apart from its strength, the strain is most well known for the physical effects it imparts. This is the kind of indica stone that will not let you stay stood up for long after even a moderate amount is consumed. It hits hard, spreading waves of sedation throughout the body, and whilst there is a cerebral sativa side there it pales in comparison to the physical component. This consequently makes Extreme Impact Auto somewhat unsuitable for daytime usage. Beginner smokers especially should take care of their consumption or they may quickly find they’ve had more than enough.

The taste of the strain presents another of its strengths. These are smelly pungent buds, ripe with notes of lemon and lime, and as you smoke and exhale you detect a refreshing element mixed with hash. The nugs are generally large and rounded in shape, with an enticing stickiness to each one.

Extreme Impact Auto presents few challenges even to the least experienced of growers. The plant will steadily get bigger and shake off any mould or disease heading its way, allowing it to be cultivated even in the humid environments that may otherwise prevent less hardy strains achieve their potential.This ease of growth extends to the conditions in which it can be kept. Extreme Impact Auto has the military-grade toughness its name suggests and will thrive indoors or outside, being especially well suited to a greenhouse. Its indica dominance and ruderalis side naturally means the plant stays on the short side at 70-80cm in height. Despite its size, the plant can still produce a relatively gargantuan yield of 650g per m2 indoors or 50-150g per plant outdoors. All this is obtainable within the plant’s short eight week flowering time.

Extreme Impact Auto - Heavyweight Seeds, 4.0 out of 5 based on 1 rating