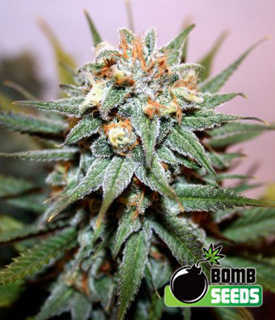 The Hash Bomb strain is the result of crossing Hash Plant with a new age skunk and the infamous Bomb #1. The upshot is a powerful and high yielding, indica dominant weed with a high CBD level that is excellent for hash production.

As its name suggests, the mild aroma is of sweet hashish mixed pleasantly with spices. These impressive notes carry through clearly on the flavour of the smoke, which is incredibly smooth and easy on the throat. The effect is strong and tranquilising, leaving you feeling calm and relaxed for a couple hours. This is a great strain for staying in and just chilling with. The Hash Bomb strain is used medically to treat muscular pain, headaches, anxiety, depression, and insomnia.

Hash Bomb seeds grow to a medium height, reaching between 90 and 140 centimetres. It has a well formed bushy structure which branches out wide in a typical Indica shape. The leaves are wide and dark with short internodal distances, meaning its dense buds are grouped tightly together. The buds are covered in a thick layer of resin, which reaches down the leaves and is what makes this such a great strain for hash production. THC levels have been measured at the 20% mark.

Indoors, the plant’s short and bushy structure make it suited ideally for a SCROG set up. It will do well in soil, but it’s in hydroponics where it reaches its full yield potential. Get the set up right and you’ll produce a whopping 600 grams per square meter.

Its resistance to mould and diseases make this an excellent choice for growing outdoors. Its neutral odour when flowering make it an ideal strain if you’re concerned about nosey neighbours or if you’re guerrilla growing. With a short flowering time of 6 to 8 weeks, you can expect to harvest at the end of September, beginning of October.

Hash Bomb seeds are an excellent choice if you’re looking for a vigorous growing, large producing weed strain. Its high levels of CBD make it ideal for medical patients, and its low odour in flower mean its great for stealth. Its tasty sweet flavour and calming sedative stone will also impress experienced smokers.