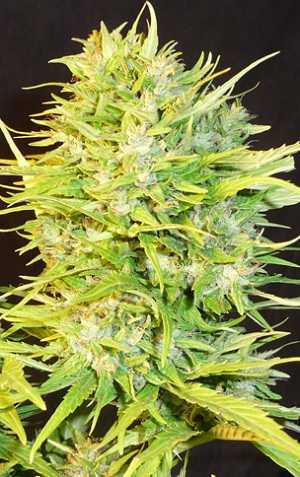 The exact genetic background of Iranian Autoflower is somewhat murky, but we do know that this strain is mainly based on a cannabis type from the mountainous regions of Iran. This weed has become a popular choice in recent years, and it was named as one of the top 10 strains of the year in 2011 by Danny Danko in High Times. It is an unusual auto strain since, unlike most others of this type, it contains no Ruderalis genetics.

Iranian Autoflower weed has a distinctively hash like aroma and the taste has spicy undertones with definite black hash flavour. The high is physical and somewhat sedative, although it won’t leave you sprawled on the sofa. It doesn’t have a strong record in medical use, but it can be helpful with stress and insomnia.

The plants grow quite short, seldom taller than one metre, and there is a minimum of branching. Leaves are bright green and the buds are smallish and round, taking on a golden colour as the plants near harvest. THC range is 10 to 13 percent.

The SOG growing method produces good indoor results with the Iranian Autoflower strain, and the plant’s autoflowering qualities mean that you don’t need to adjust lighting times – a simple 12 hours on, 12 hours off will work fine. Flowering time is quite short at six to seven weeks and this weed can be ready for harvest in as little as 90 days. Yields are in the 250 to 350 grams per square metre range.

This plant’s Iranian mountain origins means it’s quite hardy so you can grow it successfully outdoors even in the cooler summers of northern Europe. Outdoor yields are between 100 to 200 grams per plant.

To conclude this Iranian Autoflower review, if you want to grow some weed discreetly outdoors, its diminutive size makes it an ideal candidate. Iranian Autoflower’s quick growing times and hardiness mean that it’s even possible to fit two harvests into one growing season.