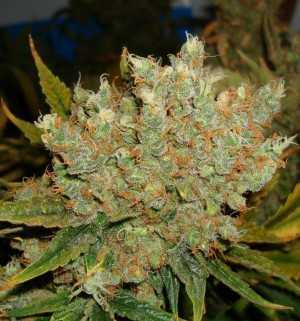 Jack Flash is a refinement of the Sativa dominant Jack Herer strain, a 1994 Cannabis Cup winner named after a highly respected legalise cannabis campaigner. Dutch horticulturists back-crossed Jack Herer with Super Skunk, Haze and Northern Lights to create a balanced strain that is marginally Indica dominant, but still has lots of Sativa characteristics. Its creators were vindicated in their work when the strain took third place overall in the 2004 High Times Cannabis Cup.

As the Jack Flash strain grows, you’ll notice a strong aroma with tones of lemon and pine. When you sample the harvest you’ll taste that pine and citrus with the addition of some exotic spices. The high is cerebral and soaring but not overpowering, so this a good weed for daytime use and for socialising. Medical dispensaries recommend this weed for stress and for poor appetite.

Jack Flash seeds produce tall plants with pale green, long-fingered leaves. The buds are roundish and sticky with resin, swelling quite markedly as the plant reaches maturity. THC content is in the 15 to 20 percent range.

In temperate regions, you’ll do best with Jack Flash weed with indoor growing. Its tall growing habit makes it a good choice for the SCROG method and it is happy in either hydro or soil. Flowering time is nine to 11 weeks and yields are from 350 to 450 grams per square metre.

If you live somewhere with a sub-tropical climate, you can grow Jack Flash outdoors. You may want to trim it as it grows since it tends to stretch when left to its own devices. Harvest time in the northern hemisphere is late October to early November.

Like its ancestor Jack Herer, the Jack Flash strain is a favourite with experienced gardeners who like plenty of Sativa in the mix, and it’s proved its worth with recognition in the High Times Cannabis Cup.