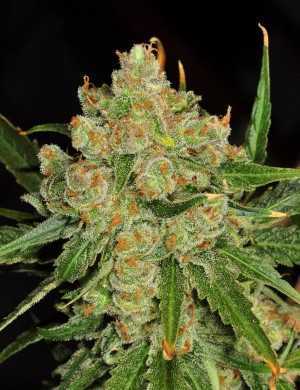 Author and activist Jack Herer, who sadly passed away in 2010, was a campaigner for cannabis legalisation, a proponent of medical cannabis use and famous as ‘The Emperor of Hemp’, and this strain is named in the American’s honour.

This Sativa dominant weed is a cross of the Skunk #1, Haze and Northern Lights strains. It was the overall winner in the 1994 High Times Cannabis Cup and went on to win the Sativa section of the Cup in 1999.

It has a pungent skunky aroma and taste, with heady notes of exotic spices and a hint of muskiness. The high is immediately euphoric, with body effects that are not too heavy. Medical dispensaries recommend it for muscular pain relief and stress.

Jack Herer weed grows medium-tall, from 150 to 170 centimetres and has the lanky structure typical of Sativas. The long-fingered leaves are light green and the buds are dense with a light-coloured covering of resin crystals. THC content is between 15 and 20 percent.

Grown indoors in soil or with a hydroponics set-up, the plant performs well using the SOG growing method. Flowering time is from nine to 11 weeks and indoor yields are in the 400 to 500 grams per square metre range.

Jack Herer seeds thrive outdoors in a Mediterranean climate, and with enough sunshine you can expect to harvest around 500 grams per plant in late September or early October.

The award-winning Jack Herer produces good yields and its genetic heritage makes it a stronger than average smoke. Despite that, its Sativa dominance makes it a good daytime smoke.