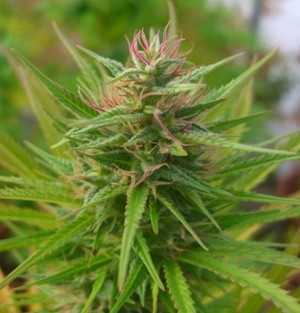 Jamaican Pearl was specially created to maintain the Sativa qualities that make Ganja from the Caribbean such a great smoke, but adding some Indica heritage so that this weed can be grown outdoors in the cooler temperatures of northern Europe. This strain is a cross between Early Pearl and the Jamaican strain, Marley’s Collie, named for the great reggae master himself.

The Jamaican Pearl strain has a recognizably tropical, fruity aroma and the taste continues this theme with the addition of exotic spices. When you smoke this weed, you’ll find yourself in a sunny, energetic mood so it’s a good for parties and socializing. In medical use, it can help with stress and poor appetite.

Jamaican Pearl seeds produce plants that grow quite tall, two to three metres, with side stems thrusting upwards and elongated, light green leaves. The buds are cone shaped, quite long and covered in sticky crystals. THC levels vary from 10 to 20 percent.

Despite its Sativa background, this strain has been developed to grow outdoors even in the lower temperatures and sunlight levels of a northern European summer. As long as you make sure to avoid frost, you should have success with outdoor growing even in northerly climes.

You can also grow this strain indoors where the flowering time will be eight to 10 weeks and you can expect to harvest around 400 grams per square metre.

Northern Europeans can treat themselves to a taste of the Caribbean by growing Jamaican Pearl, which produces a harvest of potent weed that gives a rushing, cerebral high.