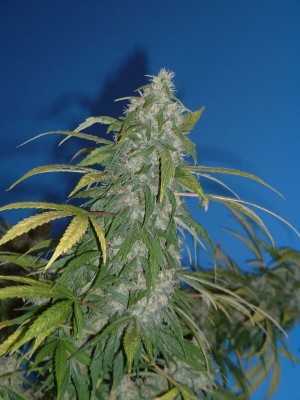 A favorite in Amsterdam coffee shops, Sativa dominant Silver Pearl is a cross between three strains; Skunk #1, Early Pearl and Northern Lights. All are well-respected and popular strains in their own right, with the latter two taking awards in the High Times Cannabis Cup. Competing in its own right, it took second place overall in the 1993 Cup.

Silver Pearl Weed has a powerfully earthy, skunky aroma and its taste combines those notes with spice and fresh green herb flavours. The high starts off with a soaring rush that settles into an energised stone lasting for up to three hours. Definitely a good weed if you’ve got things to do – not so good at bed time. Medical dispensaries offer this strain to patients suffering from stress or poor appetite, and for pain relief.

Although it is Sativa dominant, its Indica heritage dominates its growth pattern so that the plants tend to be medium in height – 120 centimetres indoors, somewhat taller outdoors. Leaves are quite sparse, broad and medium green, and buds are dense and sticky with resin. THC level is around 16 percent.

Indoors, the Silver Pearl strain produces good harvests with the SOG growing method. Its flowering period can be as short as six weeks, and you can expect to harvest between 500 and 500 grams per square metre.

Careful breeding of this strain means that it can grow outdoors even in northern Europe, as long as there’s a reasonable amount of sun during the summer. Growers can expect to harvest in early October.

The horticulturists who created this strain were aiming to produce a plant with a good bud to leaf ratio that was quick flowering and had a decent THC level. They succeeded in those aims, and Silver Pearl is a good bet for both experienced and novice growers.