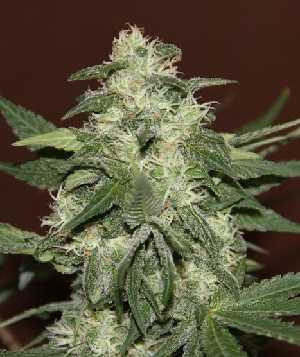 Kushage is a Sativa dominant weed, the product of crossbreeding the OG Kush and SAGE strains. Top cannabis writer Danny Danko, senior cultivation editor at High Times, chose this weed as one of the top 10 Kush strains in his seminal 2010 book, ‘The Official High Times Field Guide to Marijuana Strains’. Kushage also took third place in the Sativa section of the 2005 Cannabis Cup.

The Kushage strain has a spicy smell with notes of sandalwood while the flavor has notes of pine, tropical fruit and citrus. The high is quick-acting and mentally stimulating, leaving a clear-sighted stone that last for two hours or more. After that, there is something of a comedown, but nothing too drastic. Medical practitioners recommend the Kushage strain for stress and poor appetite.

Kushage seeds produce plants that grow to between 125 and 150 centimetres tall with dark green leaves that have a waxy appearance. The plants grow multiple branches bearing lime green, elongated buds that have a covering of orange to amber hairs and silvery crystals. THC level is 18 percent

Kushage is well-suited to the SOG growing method and it’s a good idea to thin out the branches so that the plant’s blossoms get plenty of light. Growing this plant in hydro will give the highest yields but growing in soil will produce the best flavour. Flowering time is 10 to 11 weeks and you can expect yields of around 400 grams per square metre.

Outdoors, this weed really needs a Mediterranean climate to grow successfully. Harvest time in the northern hemisphere comes in mid to late October.

Kushage strikes a happy balance between the mentally euphoric qualities of Sativa and the physical stone of Indica. The final points of this Kushage review are that it’s quite easy to grow indoors, and it comes with a seal of approval from the legendary Danny Danko.