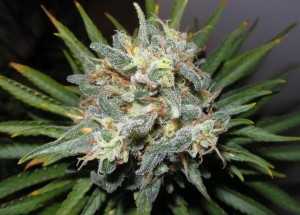 Morning Glory combines Sativa and Indica genetics, with the former originating from Hawaii and the later coming from a mixture of old school Skunk and Afghani Indica. Created in the Netherlands, this weed’s popularity was proven by its performance in the 2002 High Times Cannabis Cup when it took first place overall.

This weed displays a subtle flavor with a variety of keynotes including citrus, almond and mild pepper, while its aroma has an unmistakable skunkiness tempered by floral tones. The initial hit is best described as a soaring euphoria which then gives way to a relaxing though not overpowering body stone. You’ll enjoy this weed whether you’re on a night out with friends or stopping in with some favorite music or a movie. In medical use, it can help with stress and insomnia.

Morning Glory seeds produce plants of medium height with a fair amount of branches which bear bright green leaves. It grows long buds that are dense and covered in a coating of silvery crystals. You can expect a THC level of up to 20 percent.

Indoors, it responds well in a soil medium such as a specialist potting compost. It flowers for nine to 10 weeks and can produce yields as high as 450 grams per square metre.

You can plant Morning Glory seeds outdoors in northern climes, but it will do best somewhere that has a Mediterranean climate or warmer. If you’re planting it in somewhere cooler, be sure to wait until spring frosts have passed. Outdoor harvest time in the Northern Hemisphere is from early October onwards, depending on how sunny the summer has been.

Morning Glory offers an excellent combination of Sativa and Indica characteristics, it’s not too difficult to grow, and it delivers a powerful stone.