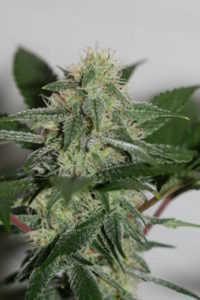 Just for the sake of clarity, this strain review is for Lemon Venom by Cream of the Crop, which is absolutely no relation to Venom OG by Rare Dankness Seeds, although they are both Indica dominants and both have lemon flavours.

Lemon Venom is a three-way cross between Sensi Star, Big Bud and Mega Lemon.  While the clue is in the name when it comes to taste, it still may surprise you a little, there are clear notes of pine for a blast of menthol freshness and a robust earthy base to give a reassuringly solid body.  The aroma may well take you completely by surprise.  While there is certainly plenty of citrus zinginess to it, there’s a definite chemical edge, in fact, it’s rather like a good quality, lemon-scented cleaning fluid.

Even though this is a pure Indica, Lemon Venom still packs in a very reasonable 18% THC.  This is certainly enough to deliver fast-acting pain relief along with a euphoric pep to all but the very lowest of moods.  For the record, when we said this strain was fast-acting, we really meant it.  After the initial head high, you’ll get a reminder that, for all its THC content, Lemon Venom is still very much an old-school Indica at heart, as the couch lock sets in and you simply lie back and enjoy the feeling of happy relaxation.  What’s particularly interesting about Lemon Venom is that it doesn’t just quietly fade out when its work is done as so many other strains do.  Quite the opposite, in fact, it brings you back into the world with a cheerful buzz, which means that Lemon Venom is an excellent “wake and bake” strain.

Growers should note that unlike many of the offering from the Cream of the Crop seedbank, Lemon Venom is a straightforward, old-fashioned photoperiod strain, which means you’re managing light cycles, although it is generally sold feminized, which at least saves you the hassle of sexing seeds.

On the plus side, Lemon Venom produces the sort of yields which would be impressive from a tree-like Sativa, presumably thanks to the Big Bud genetics.  It can yield up to 600 gr/m2 indoors and 1Kg/pp outdoors.  It is,  however, important to note that while Lemon Venom has a fairly average indoor grow time of 8 to 9 weeks, the outdoor harvest is in the end of October, so in practical terms, it’s probably best to think of Lemon Venom as an indoor-only strain.