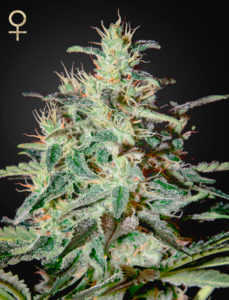 Balanced hybrid, White Lemon is a cross between El Niño and Super Lemon Haze.  It will please those who like fresh, citrus strains.  It’s an inspired blend of Haze and Skunk, which delivers a medium-strength dose of both THC and CBD and is a reasonably compact and undemanding grow.

With about 20% THC, White Lemon is towards the upper end of what would be considered medium-strength strains by modern standards.  It’s enough to tackle most physical pain and to dispel most negative emotional states.  As you’d expect from a balanced hybrid, the high is fresh and focused but mellow rather than energetic.  The THC is balanced with a moderate level of CBD so your high gently ebbs into a moderate stone, which washes away any remaining aches and pains, both physical and mental.  Overall, even though the THC content looks very high for a night-time strain, White Lemon is probably best suited for night-time use, but the CBD content is low enough that it wouldn’t be out of the question to use it in the day time.

White Lemon is equally happy indoors and outdoors, as long as the climate is warm, sunny and dry.  Indoors it will  produce up to 800g/m2 after about 8 to 9 weeks of flowering. Outdoors it will yield up to 1KG towards the end of September or start of October.  It tends to grow within a height range of 1M (indoor minimum) to 1.5M (outdoor maximum) and leans more towards a traditional indica shape.  It is also very responsive to plant training.

If you are growing indoors, it’s important to allow sufficient floor space for your plants to grow outwards without bumping into each other. You will likely also need to allow space to put supports later in flowering, when White Lemon will become weighed down with bud. When growing outdoors be aware that this strain develops a strong odour. Good odour control is key for indoor grows, as this quantity of bud will produce a very strong scent later in flowering.  Generally speaking, however, White Lemon is a very straightforward strain to grow.

The taste of White Lemon is possibly a little different than you would expect from the name.  There is plenty of lemon freshness, but there’s also plenty of skunk and more than a passing nod to haze, all of which makes for plenty of complexity and interest.   The aroma is more generally citrus, rather than specifically lemon, there are also clear undertones of skunk and haze.