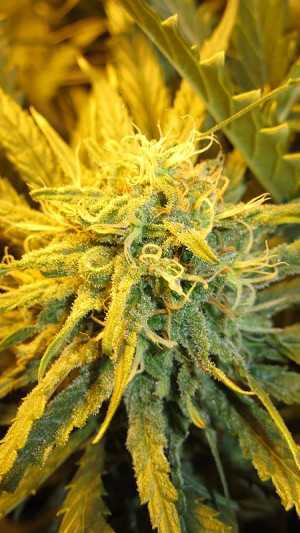 The LSD weed strain gets its name from its potent hit, almost akin to an acid trip, which is the result of its exceptionally high THC level. This Indica dominant weed was created in the Netherlands by interbreeding Skunk #1 with Mazar, a strain with genetics from the city of Mazar-i-Sharif, set in one of Afghanistan’s main cannabis growing areas. LSD cannabis is a popular favorite in Amsterdam’s coffee shops and it took third place in the Indica section of the 2008 High Times Cannabis Cup.

LSD weed has a sweet smell with musky tones and the flavor displays notes of chestnut and pine with a hint of earthiness. The hit is euphoric and intensely psychoactive – this is one of those strains that inexperienced smokers are well advised to approach with caution. Medically, LSD can be used to alleviate sleeplessness and poor appetite.

LSD seeds grow to a medium height and the foliage is a lightish green during the early growth period, darkening as the plants mature. The buds are compact, middling in size and covered in brownish hairs. THC content can be as high as a whopping 24 percent.

LSD is a fairly hardy plant that is quite easy to grow. Indoors, it benefits from the SOG growing method and yields can be as high as 600 grams per square meter. Flowering time is eight to nine weeks.

Outdoors, this weed will thrive in a sheltered spot with plenty of sunshine. In the Northern Hemisphere, the plants should be ready for harvest in mid-September.

Growers looking for a strain that produces cannabis at the top end of the potency scale should certainly consider LSD weed. This strain also has the benefit of being relatively easy to grow.