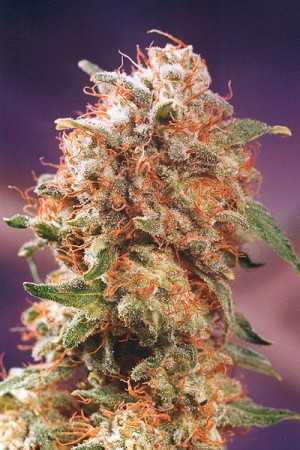 Mazar is an Indica dominant hybrid from the Netherlands where it was created by combining an Afghani Indica with Skunk #1. It gets its name from the Afghani city of Mazar-i-Sharif in the northern province of Balkh, one of the country’s main cannabis growing areas. Shirak-i-Mazar (milk of Mazar) hashish, popular with connoisseurs, comes from the region. Mazar weed took second place in the Indica section of the 1999 High Times Cannabis Cup.

Mazar weed is not the strongest smelling, but it does display a distinctive skunky odour tempered by spice tones. The hash-like flavor has spice notes combined with sandalwood and pine. The stone is quick and heavy, with ensuing couchlock almost inevitable. In medical use, this weed can be used for insomnia and stress.

This is a short growing plant, attaining a height of about a metre and taking the shape of a small conifer. Mazar seeds produce long, dense buds and the leaf growth is a bright green. THC content is around 20%.

If you’re in cooler northern countries, it’s best to grow this strain indoors since outdoor growing will give a harvest as late as November, meaning the plants risk being damaged by frost or heavy rainfall. If you live somewhere with hot summers, like Spain or California, it will happily grow outdoors.

Indoors, the SOG growing method is recommended and flowering time is seven to eight weeks. Yield is between 450 and 550 grams per square metre.

Choose Mazar for its good indoor yields, its high THC content and its dependable growing habits. If you have inquisitive neighbours, the relatively mild odour it produces while growing also makes it worth considering.