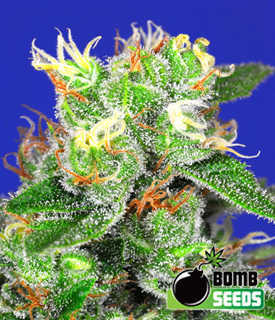 It would appear that the idea behind the creation of the Medi Bomb #2 strain was to produce a low CBD, high THC weed that limited lethargy normally associated with medical strains. Through crossing Super Silver Haze with the rarely used Bomb #2, the result is an extraordinary yielding plant that stimulates your creativity and appetite, but doesn’t leave you locked to the couch.

The aroma is not overpowering, yet is a distinct combination of haze mixed with fruits and diesel. The taste of the smoke is a pleasurable fusion of sweet spices and fuel, with a hint of melon on the after taste. The buzz is quick hitting and energetic right from the start, slowly mellowing off into a full on head high. Medically, it’s used to treat depression, anxiety, and loss of appetite.

Medi Bomb #2 seeds are another Bomb Seeds strain with explosive growth, reaching between 90 and 140 centimetres indoors and a whopping four metre plus outdoors! The plant’s structure is much like a Christmas tree and reacts well to being topped. The buds are tight and covered in an attractive layer of glistening crystals, with THC levels measured around the 15 to 20 percent mark.

Indoors, this strain reacts well to a SCROG set up, with it thriving in soil or hydroponics. Flowering times are short for a sativa dominant strain, with incredible yields of 600 to 700 grams per square meter taking as little as nine weeks.

Outdoors, Medi Bomb #2 seeds can cope well with cooler temperatures making it possible to grow them in northern climates. Its mould resistance mean that it is takes little caring for, but planted in an area that receives lots of light and heat, it can produce and whopping 1.5Kg per plant! Such impressive harvests come early to mid-October.

The Medi Bomb #2 strain is an excellent sativa weed with an energetic and clear headed high that will impress the most seasoned smoker. Beginners should consider it for its ease of growth, while commercial growers will be overwhelmed by its humungous yielding ability and short flowering time. All that’s left to say is this is yet another top grade weed strain from the guys at Bomb Seeds.