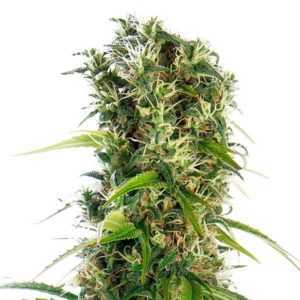 Sensi Seeds has been a lot more revealing about the reasons why they named this strain Michka than they have been about how they created it.  All that’s known about Michka’s genetics is that they include Silver Pearl.  The strain has been confirmed as 80% Sativa and came out of the same breeding programme which produced the Eagle Bill strain.  The name is a tribute to French cannabis activist and general all-round legend Michka Seeliger-Chatelain.

The taste and aroma both tally with the Silver Pearl heritage in the sense that they are fresh, zesty and very citrus.  There’s definitely lemon in there and also more than a hint of grapefruit.  Unlike Silver Pearl, however there’s a lack of skunk, so presumably this element has been moderated by the other parent, which could have been Lemon Haze (although that’s only an educated guess).

Rather frustratingly, Sensi Seeds has also declined to provide THC levels for Michka, however Silver Pearl is known to have anything between 13% THC and 21% THC and Lemon Haze between 15% THC and 25% THC.  Therefore, based on genetics and effect, an expectation of 18% THC and 22% THC would seem reasonable.

One verifiable fact about Michka is that this strain is a great treatment not only for physical pain, especially pain related to eye pressure (glaucoma) but also depression, stress and fatigue.  Michka delivers the classic Sativa high, which is both energetic and creative.  Basically it’s the opposite of what you want for an insomnia treatment.

Another way in which Michka is a classic Sativa is that this is a strain, which really likes to grow, although it does tend to grow mainly upwards rather than outwards, which does lend itself to some interesting options.  For example, if you have plenty of vertical space, you could just leave it to turn into a small tree, alternatively, you could look to tame it without compromising on your harvest, by using a Sea of Green or Screen of Green approach, to which it lends itself well.

All that growing takes time so you’re going to have to allow at least 10 weeks (to mid October) for Michka to develop and if you can give it another week or two then you will be rewarded with very respectable yields (around 450g/m2 indoors and 600g/pp outdoors).  You will, however, have to be extremely careful about ventilation as Sensi Seeds acknowledges that Michka is a bit susceptible to mould.