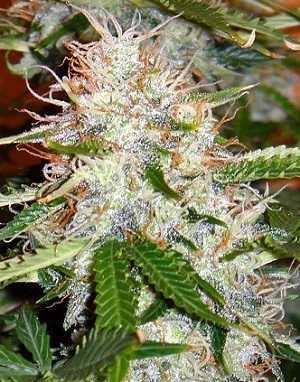 Northern Storm Automatic marijuana was developed in the Netherlands by crossing the legendary Northern Lights with the crystalline Snow Storm and an unknown ruderalis. The outcome is what you’d expect from any strain with Northern Lights genetics; an extremely potent and easy to grow weed strain.

The fragrance is light and citrusy, reminiscent of grapefruit and lemon. once lit, the smoke is fruity, full bodied, and sour on the exhale. The buzz is a nice pleasant combination of a strong cerebral high mixed with a calming body stone which lingers for a couple of hours. Medically, this strain is suitable for anxiety, stress and depression.

Northern Storm Automatic seeds are great choice if nosey neighbours or space are an issue, due to short stature and neutral odour during flowering. The plants have a very high bud to leaf ratio and are covered in an impressive layer of glistening resin and THC levels are high.

Indoors, this strain is perfect for grows where space is an issue, and will do well in either a simple soil set up or in hydroponics. It’s recommended that you give it at least 20 hours of light in every 24 to maximise the plants yields. It may be small, but grown in optimal conditions using SOG growing methods, this autoflower can produce as much as 300 grams per square meter in as little as 65 days from seed.

Outdoors, you can plant Northern Storm Automatic seeds in cooler northern climates and still expect decent results. Make sure you position it somewhere it receives plenty of light and you’ll be able to harvest from May onwards.

One of the earlier commercial autoflowering strains, Northern Storm Automatic marijuana is still a weed to be reckoned with. Beginner growers can expect great results, but those with a little more experience will get an excellent harvest from this diminutive weed strain. It is recommended to those who stealth is an important factor, but still want plenty of weed that packs a punch.

Northern Storm Automatic, 4.0 out of 5 based on 37 ratings