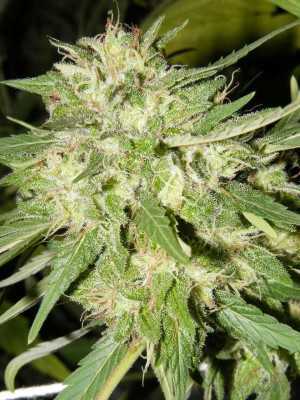 Northern Lights marijuana is an old school strain, one of the earliest skunk type hybrids from the 1980s, and is a principal genetic building block for many of the modern cannabis strains. Northern Lights is heavily Indica dominant with most of its genes coming from Afghani strains, but it does have some Sativa genes from Thailand. It won the Indica section of the very first High Times Cannabis Cup in 1989, and went on to win two more prizes in the competition in 1990 and 1994.

Northern Lights weed has an earthy aroma that is reminiscent of prime black hash and the flavor has notes of sweet spices and ripe fruit. This weed’s powerfully sedating high makes it an ideal choice for zoning out in front of a movie or listening to your favorite music. Medically, Northern Lights is recommended for poor appetite, muscular pain and insomnia.

Northern Lights seeds produce plants that grow between 100 to 120 centimetres tall with broad, jungle green leaves and a large amount of dense, roundish buds that are covered in sticky resin. Depending on the growing circumstances, THC content can vary from 15 to 20 percent.

Northern Lights was one of the first strains specially designed for indoor growing and you’ll find that it thrives whether you cultivate it in hydro or soil. It’s a good choice for the SOG growing method and flowering time is from six to eight weeks. You can expect to harvest between 400 and 500 grams per square metre.

Outdoors, Northern Lights weed likes plenty of warm sunshine, so only grow it in the open if you live somewhere at least as warm and sunny as the Mediterranean.

Beginners choose Northern Lights marijuana because it’s easy to cultivate and the results are dependable. Experienced gardeners and smokers choose it because of its heritage appeal, potency and high yields, which also makes it popular with commercial growers.