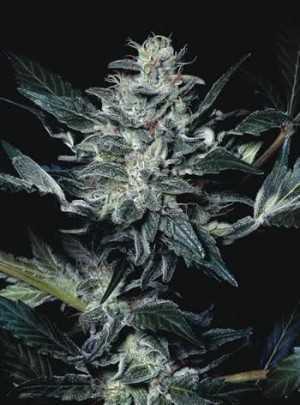 Sensi Star was introduced to the market in the Netherlands in the mid-1990s. It’s an Indica dominant strain but its creators have kept its exact origins a secret.

This weed has proved its worth by winning a hatful of prizes in the annual High Times Cannabis Cup competition’s Indica section. In 1999 it won first place in the Indica section, 2000 saw it take second place in the same section, and in 2005 it came third.

Sensi Star combines a cerebral hit which stimulates the synapses with a potent body hit that may leave you flopped in front of the TV, if you have one toke too many. The weed burns with a pungent smell that includes hints of lemon, mint and grapefruit, and the flavor continues those notes. Medically, it can help with insomnia, lack of appetite and muscular pain.

This weed produces plants of medium height, 75 to 100 centimetres, with wide leaves which are darkish green and fan shaped. Grown outdoors without pruning, the plants can grow bigger and as tall as two metres. The buds are thick and sticky, and covered with amber hairs. THC content is 15 to 18 percent.

Sensi Star seeds grow well indoors using the SOG method and it’s a good idea to give them two weeks growing time before putting them on a 12 hours on, 12 hours off light regime. The plants are happy in hydro or soil and are noted for their resistance to mould. Flowering time is seven to eight weeks and yields are up to 450 grams per square metre.

This is a hardy strain and can be grown outdoors even in temperate climates as long as you plant it in a sheltered spot with plenty of sunshine. Outdoor growth can give yields of up to 400 grams per plant.

Sensi Star has been a favorite with growers and smokers since it first appeared in the 1990s. The reasons this Sensi Star review can give for this include its ease of growth, good flavour characteristics and potency.