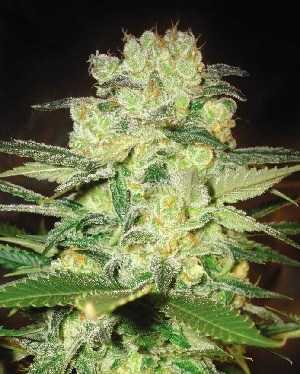 Any White Star review should open by acknowledging the outstanding parentage of this strain, NYC Diesel and Sensi Star, as this set up the tone for the rest of the piece. NYC Diesel has appeared in the honours in the High Times Cannabis Cup four times, while Sensi Star has achieved that accolade thrice. White Star itself is a Sativa dominant weed strain.

The White Star strain has a pungent, skunky smell with notes of citrus while the flavour includes lemon with a diesel undertone on the exhale. The effects start with a mild to medium body hit that rapidly transforms into a potent and soaring cerebral high. Medical practitioners recommend this weed for muscular pain and poor appetite.

White Star weed plants grow tall, up to two metres indoors and sometimes over three metres outdoors. The leaves are large, fan-shaped and mid-green while the elongated, conical buds are covered with orange to brown hairs and sticky resin. THC content is high.

Growers in northern countries with cooler summers will struggle to grow this strain successfully outdoors. Indoors, the White Star strain will do well in soil or hydro mediums and grow up to two metres. Prune the plants as they grow to encourage flowering and budding. Flowering time is 10 to 12 weeks, and yields are around 400 grams per square metre. Outdoors, the plants will thrive with plenty of warm sunshine and grow to three metres or more. They need support in the later stages of growing as they stretch out. Outdoor harvest comes in the first half of November.

If you like a potent Sativa hit, with its uplifting mental high, this White Star review recommends it to you. Like many Sativas, it does require some gardening skill, but it rewards patience and perseverance with quality crops.