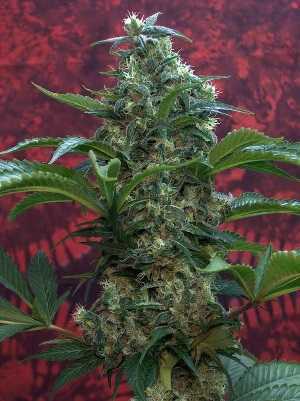 This innovative Sativa strain was introduced to the market in 2005 by Mandala Seeds. Satori cannabis is unusual because it has a shorter flowering time than most Sativa strains, it’s easier to grow and it can be grown outdoors in northern Europe. It’s was created by crossbreeding native Nepalese strains. High Times Magazine’s Donny Danko named it as one of his strains of the year in 2007.

Any Satori review can’t fail to mention the strongly aromatic quality of this weed. It combines Mediterranean herbs, exotic spices and floral notes, both in the bouquet and the taste. The high is typical of a Sativa, heady and soaring without the couchlock so often characteristic of Indicas. Medically, it’s good for combating stress and low appetite.

Indoors the plant will grow to two metres while outdoors it can extend to three metres. Leaves are light green and long-fingered. The buds are elongated, dense and covered in silvery crystals as harvest approaches. THC content is exceptionally high, ranging from 23 to 28 percent.

Outdoors, Satori seeds produce plants that can thrive in cooler climates, although it also has good heat tolerance. Indoors, Satori thrives in a rich potting compost, needs minimal nutrients and thrives in a SOG setup. Flowering time is nine to ten weeks and indoor harvests are 550 to 600 grams per square metre. Outdoor yields are up to 1,200 grams per plant with harvest coming in late October or early November.

Those looking for a Sativa that produces high yields, is easy to grow and thrives outdoors even in cooler temperatures, should give serious consideration to Satori cannabis. Appropriately, its name is Japanese for enlightenment, which you’re likely to experience when you smoke this outstanding strain.