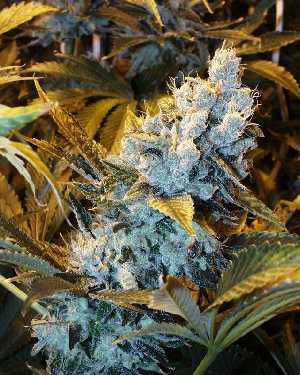 The White Widow Skunk strain was created in the Netherlands by crossing three legendary strains with a stable sativa. In the mix is the award winning White Widow and Northern Lights, and the renowned Skunk; which forms the basis to many of the top strains created in the last two decades. The result is a weed that has taken the best attributes of its parentage and has produced one of the most potent and large yielding strains out there.

The aroma is of fresh citrus fruits and its lemony flavour carries nicely on a smooth smoke that gently expands in the lungs. The hit is anything but gentle, coming on strong and fast, taking over your mind and body for a couple of hours. Medically, this weed is great for treating muscular pain, headaches, and insomnia.

It grows to a medium height with a short internodal distance. The plants are bushy in structure with broad palmate leaves, which darken as the plants mature. The buds are large and covered in vast amounts of sticky white crystals that reach down the leaves. It should come as no surprise that THC levels are considered very high.

Indoors, the White Widow Skunk strain will thrive in a hydroponic set up using the SOG growing method. This weed is an impressive yielder, producing 700 grams per square meter with a flowering time of 8 to 10 weeks. Growers have been known to let the plants run for an extra week to increase resin production.

This weed strain is packed full of impressive characteristics and anyone who writes a White Widow Skunk review would recommend it. Its potency will make the most hardened of smokers go weak at the knees, while its plentiful yields will impress experienced and commercial growers. Although, not the best in the hands of beginners, get the conditions right and you’ll have a bucket load of Grade A weed.