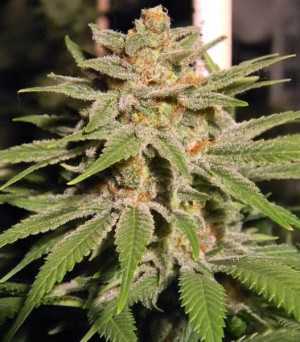 Indica dominant Shiva marijuana is a heritage strain and its genetic background is from northern Indian. Lord Shiva, of course, is one of the principal Gods in the Hindu pantheon and is characterised as the Destroyer or the Transformer.

The Shiva strain has a strong smell of dank earth and the flavor will remind you of a strong black hash with notes of pine as well as Indian spices like cardamom and cinnamon. This weed is a heavy hitter and you can expect to be very stoned when you smoke it, with couchlock a strong possibility. Medical practitioners recommend this weed for stress, insomnia and muscular pain.

Shiva seeds produce plants that are short, compact and bushy, growing to a height of between 50 and 80 centimetres. Leaves are dark green and broad with thick fingers and the buds are on the small side but very dense. THC levels are in the 15 to 20 percent range.

Indoors, you can cultivate Shiva in hydro but it does best in a soil growing medium using the SOG method. This plant doesn’t like to be over fertilized, so go easy with the nutrients. Flowering time is eight to nine weeks and you should achieve yields of 400 to 500 grams per square metre.

This is a robust plant so you can grow it outdoors in northern European countries as long as you plant it out in a sunny, sheltered spot. Harvest in the northern hemisphere comes in the first half of October.

Shiva marijuana is good choice for novice growers because it’s easy to cultivate, has good resistance to mold and pests, and grows well in cooler climates. Novice smokers, on the other hand, should be warned that this weed packs a potent punch.