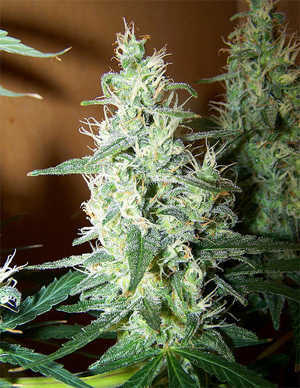 Sour Diesel, originally grown in California, is a strong favorite with cannabis connoisseurs around the world. Sour Diesel weed is a combination of Sativa and Indica strains and it is noted for its health yields.

For some, the slightly acrid taste with undertones of bitter citrus is an acquired flavour while others are instantly captivated by it. Sour Diesel is particularly recognised for its very strong stone lasting up to five hours. The high can include euphoria, visual affects and a ferociously increased appetite. Medicinal properties commonly attributed include pain relief and amelioration of migraine symptoms.

While you can certainly find other marijuana strains with higher levels of THC Sour Diesel weed comes is at between 15 to 20 percent.

It’s worth noting that growers who have concerns about nosy neighbours or law enforcement need to think about how they will contain the characteristically strong odour of this particular brand of skunk.

While growing, it produces a pervasive, heavy aroma best described as a mixture of sour lemons and diesel fuel. Grown indoors using the screen of green or sea of green methods, cultivators can expect to harvest around 500 grams per square metre.

Outdoors in warm sunshine and the right fertile soil conditions, Sour Diesel seeds can produce as much as 700 grams per plant with a November harvest. Growing time is from eight to 10 weeks and the mature plants can reach a height of nearly two metres.

This is definitely not the easiest cannabis strain to grow, and it’s available only at eye-watering prices. If you see the seeds going cheap, they’re probably not genuine.