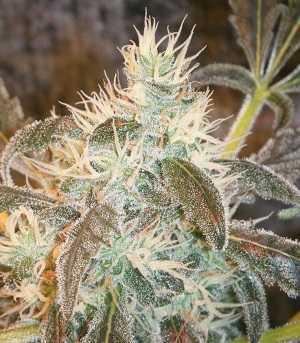 The White Lightning strain is closely related to the legendary White Widow. Excitingly for fans of white weed strains, it is both more crystalline, smoother to taste and produces a bigger yield than the Cannabis Cup winner.

The aroma of White Lightning weed is sweet and hashlike and carries through pleasantly on its heavy smoke, which also encompasses hints of spice. The stone comes on gently and progresses into a powerful, long lasting and relaxing full body stone. Medically, this strain is used for PMS, Migraines and Epilepsy.

The White Lightning strain grows to a medium height of around 90 centimetres. The plants grow with minimal side branching, with the leaves taking on a dark jade colour. Resin starts to appear on the leaves after only two weeks of flowering, which is nicely accentuated by their dark colour. This thick layer of white crystals really becomes something to behold in the final two weeks of flowering, absolutely covering its dense buds. THC levels are measured in the medium to high range.

Indoors, White Lighting weed’s columnar structure is well suited to being grown in a Sea of Green. To maximise the plant’s final yields grow it in a hydroponic set up, with yields of up to 500 grams per square meter coming after only 8 to 10 weeks of flowering. However, some growers have been known to let her go a little longer to really maximise resin production.

The White Lighting strain is not really suited to growing outdoors directly exposed to the elements, but will do excellently if you’re a greenhouse grower. Expect pleasing yields to come at the end of September or beginning of October.

To conclude this White Lighting review, not only does it have some of the most impressive bag appeal due to its crystalline appearance, but its powerful stone is likely to excite medical users. The White Lightning strain produces some of the frostiest buds out there and is one of the most exciting white strains available.