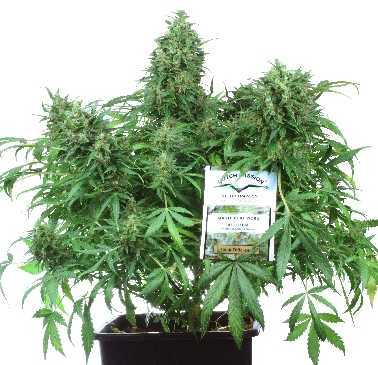 Nothing to do with a certain Californian tech company, Think Different was the brainchild of the Dutch Passion breeders who took the stellar AK 420 and crossed it with an unknown Ruderalis variety to create an autoflowering Indica-dominant hybrid with high THC content.

The flavour of Think Different is hard to describe, it’s like a very high quality herbal tea made of exotic flowers. The overall taste is one of sweet, tropical fruits, not citrus, but with an earthy aftertaste to give it body and depth.

The effect begins in the head and neck, relieving stress and creating a feeling of euphoria and high energy levels. As the immediate kick from the THC begins to wear off, the CBD creates mellow relaxation throughout the body. This acts as an anchor on the cerebral high and so the main effect is one of a clear, stress-free mind, in a body which is completely free of any pain or tension.

This is a versatile strain which will treat emotional conditions such as anxiety, stress and mild depression and will also provide relief from physical pain and nausea. It’s energizing effect can be used to combat physical and/or mental fatigue, which can manifest itself as a feeling of being “over-tired” but unable to unwind enough for proper rest and to prepare both body and mind for healing sleep. It’s also popular with creative people who need motivation and inspiration.

As an Indica dominant, this is a compact, bushy strain, which will grow out of doors provided that it is given plenty of sunlight and a reasonable amount of shelter. As an autoflowering variety it will be ready for harvest in as little as 10 weeks, which makes it a good choice for growers in climates where, realistically, there are only likely to be a few months with temperate conditions and long days. It’s also a good choice for novices as it’s very straightforward to grow and will be forgiving of those still getting to grips with basics such as lighting and watering. More experienced growers and/or those prepared to work at creating optimum conditions will be rewarded with yields to match.