Alien Dawg is a cross between Alien Technology and While the name “Alien Technology” may suggest that it is some kind of ultra-modern super hybrid, in actual fact it’s a landrace indica from 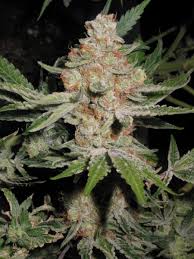 Although Alien Dawg is 70% Indica, it has an average THC content of between 16% and 20% with about 0.01% to 0.29% CBD.  This means that you initially experience a moderate head high, which is influenced by the high level of Indica genetics and so is less energetic and motivational and more happy and relaxed.  The Sativa genetics help to keep everything on the lighter side and also prevent the subsequent full-body stone from being too full-on and heavy.  You can expect some degree of couch lock but you won’t be totally incapacitated for several hours.  In short, while Alien Dawg is probably best used at night, it’s also a reasonable choice for daytime use, just as long as you remember to allow yourself sufficient recovery time before undertaking anything complicated.

Even though Alien Dawg is Indica dominant, its growing cycle is a bit lengthier than you would expect from the average Indica.  Indoors it will need 9 to 10 weeks of flowering time and outdoors you can expect to collect your harvest around the start of October.  One of the reasons why this Alien Dawg takes its time to grow is because it can get on the tall side, especially for an Indica dominant.  Indoors it can stretch up to a good 1.8M and outdoors it may grow a bit taller.  On the plus side, this creates the necessary branch space for plenty of bud and even beginners should be able to manage a good 400g/m2 indoors or 400g per plant outdoors.  Experienced growers could push this up even further.  Another of the many attractive features of Alien Dawg is that it is very robust and vigorous thanks in no small part to the high percentage of landrace genetics in its immediate background.

Interestingly, although Alien Dawg has distinct notes of chemical and fuel in its aroma, which are topped off with the freshness of pine and citrus, these aren’t really mirrored in its taste, which is quite woody at the base and then topped off by pine, sweet citrus and notes of herbs and spices.