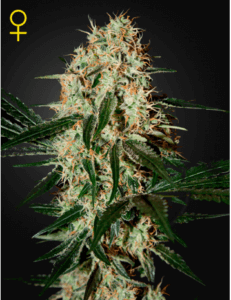 Sativa dominant (70/30) Arjan’s Haze #3 is a three-way cross between Neville’s Haze, Super Silver Haze and Laos, a landrace strain.  It was developed to be a Haze for the modern world of compact growing spaces and people with little experience of general gardening let alone growing marijuana.

Arjan’s Haze #3 is a strain which is full of surprises.  To begin with it only has 13% THC, which is much less than you would expect from a modern Sativa dominant, but is quite enough to deliver meaningful pain relief for many conditions.  It also delivers a happy, buzzy Sativa lift to your mood, which brings positivity without overwhelm.  Another surprise about Arjan’s Haze #3 is that it has more CBD than you would expect from a Sativa dominant, so you will slowly transition into a moderate body stone, which is very relaxing and comforting but will not leave you incapacitated for hours on end.  Overall, unusually for a Sativa dominant, Arjan’s Haze #3 is probably better suited to use at night, but could feasibly be used during the day on an occasional basis.

This strain will grow indoors or outdoors in a dry, Mediterranean climate.  Indoors, Arjan’s Haze #3 will need 9 to 10 weeks of flowering time and outdoors it will be ready in early October.  That’s on the shorter side of what’s typical for haze strains.  Speaking of being on the shorter side, Arjan’s Haze #3 is nicely short by any standards and particularly by the standards of Sativa dominants.  You’re looking at an indoor minimum of about 65 centimetres and an outdoor maximum of about a metre.  You can keep this strain even shorter with plant training.  What’s even more impressive is that Arjan’s Haze #3 produces absolutely superb yields.  Indoors you can expect up to 800g/m2 and outdoors up to 1Kg per plant.

As you may have guessed from this, in order to pack such a lot of bud into very little vertical space, Arjan’s Haze #3 does a lot of outward growing, in fact it looks much more like an Indica than a Sativa.  You need to allow for this  in your grow space to ensure that air flow is maintained, otherwise you may lose your beautiful bud to the dreaded mould.  If you can do this and are happy managing light cycles indoors, then this strain is a very straightforward grow.

Your harvest will taste slightly different from the typical haze.  The characteristic muskiness is still there, but it’s more fruity and less spicy than you might expect.  The aroma is also mellow fruity rather than sharp and peppery.