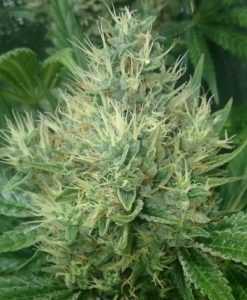 This strain can have anything from 15% to 23% THC, which means it can range from being medium-strong to very strong indeed.  Therefore, if you are thinking of growing it, you will need to be clear about the connection between harvesting time and THC content and ensure that you collect your bud at the right time for you.  Panama x Bangi Haze doesn’t have all that much in the way of CBD (less than 1%) so this is definitely a daytime strain.

In this cross, Panama (Goddess) is very much the dominant half of the partnership, so expect base notes of musk and spices combined with sweet fruitiness. While Bangi Haze contributes notes of honey and liquor and a hint of both citrus and floral.  The aroma could easily be mistaken for incense and is rich and complex as the depth of Panama Goddess meets the lighter sweetness of Bangi Haze. Which actually gets its name from the fact that it is said to resemble the incense used in Nepalese temples.

Although Panama x Bangi Haze is described as being suitable for growing indoors or outdoors, growers are likely to find themselves up against the typical Sativa conundrum, which is that these plants are both tall and slow-growing. Expect them to grow to at least 2M indoors and at least 3M outdoors and a yield of up to 500g/m2 and outdoor growers to achieve up to 1Kg per plant.

Leaving aside the challenges of dealing with larger plants, Panama x Bangi Haze is a vigorous and hardy strain, which has good resistance to diseases and pests.  It does need to be kept warm, fairly dry and sheltered, but its appetite is reasonable.