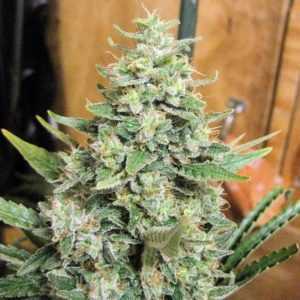 Malawi x Panama is a  cross between Old Malawi Killer x Panama Goddess as you may have guessed from its name. Both of which are, essentially, landrace Sativas.  In this particular crossing, the Malawi line dominates, which is the difference between this strain and the similarly-named Panama x Malawi.

With 20% to 25% THC, Malawi x Panama is a potent strain which delivers fast-acting, meaningful pain relief along with a noticeable boost to your mood.  Even the lower end of this range is high enough that you should treat this strain with respect and keep it for when you really need its power.  For some people that may indeed be every day, but for many Malawi x Panama may be best used as a “booster” strain, something which adds a bit of extra power to your usual strain when you’re having a bad day or which can be used instead of your usual strain when you’re having a really bad day.

As the Malawi side of the parentage dominates in this cross, so it provides most of the flavour.  Expect a base of oil, spice and wood followed by rich fruitiness.  The Panama side does make itself felt in citrus notes and a warm creaminess.  In terms of aroma, this does rather remind us of a Kush, but a Kush with lots of sweet fruitiness and a touch of zesty freshness.

Given that Malawi x Panama is, to all intents and purposes, as a landrace strain is best suited to the outdoors.  The problem for most growers in Europe is likely to be that like most Sativas, it has a long grow time. With harvests typically at the end of October or start of November.  Realistically, therefore, most people will probably have to look at indoor growing. As a sativa expect Malawi x Panama to be tall and vigorous, reaching at least 2M indoors and 3M or more outdoors.  With decent yields expect up to 500g/m2 indoors and up to 1kg per plant outdoors.

As is typical of landrace strains, Malawi x Panama is very robust.  It doesn’t require much in the way of feeding (for a plant this size) and has great resistance to common diseases and pests.