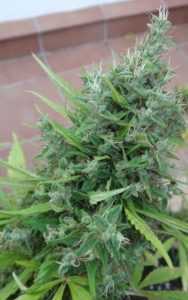 Lebanese hasn’t so much been created as domesticated.  Ace Seeds just looked for the best examples of Lebanese landrace Sativas they could find and then crossed and backcrossed and improved until they had a very individual and interesting strain on their hands.

Here’s what’s most interesting about Lebanese.  It’s 100% Sativa, but it has minimal THC, as it 8% THC is its absolute maximum.  It can have as little as under1%.  By contrast, it can have up to 16% CBD.  In fact a hefty 6% is the minimum you can expect.  This means that you can forget about immediate pain relief or anything approaching a cerebral high, you might get a bit of a mental lift, but that’s about all.  On the other hand, if you have one of the many conditions which respond well to CBD then Lebanese could be the strain for you, especially if you prefer to avoid the psychoactive effects of THC.

The taste of this Lebanese is exactly what you’d probably expect from a strain which is closely associated with hash, in addition to the spices, there are notes of wood, fruit sweetness, especially mango, and sourness.  This is reflected in the aroma, which is full of Middle Eastern exoticism.

While you can grow Lebanese indoors, it’s been developed without outdoor growing in mind and, in particular, it has good tolerance both of very hot and dry conditions and of cold and dry conditions.  It isn’t, however, all that great at coping with the wet so if you are thinking about growing it outdoors in northern Europe, then you will need to ensure that you have a sheltered location for it.  Indoors it will finish flowering in 9 to 11 weeks and outdoors it will be ready for harvest around the end of September or early October.  If this seems a bit of a contradiction, then the answer is that Lebanese is a photoperiod strain, which acts rather like an autoflowering one.  It vegetates for about 6 weeks and the moves straight into flowering regardless of light cycles.  Ace Seeds has been rather coy about its height, however, Lebanese landrace plants tend to be in the region of 1M to 1.5M so we’re guessing that would be the ballpark for this strain.

Ace Seeds has also declined to reveal details of how much growers can expect to harvest from Lebanese, simply describing the yield as “medium/high”, we’d say 500g/m2 would probably be a reasonable expectation.  Overall this strain is very easy to grow, provided you resist the temptation to overfeed it.