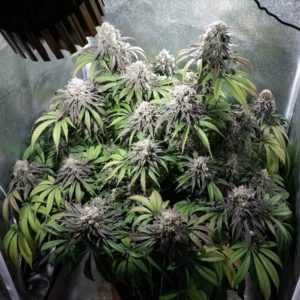 Zombie Kush is actually a blend of Kush (Lavender Kush and Bubba Kush) and Haze (Amnesia).  This means it’s a blend of two of the most celebrated genetic lines in marijuana and it brings together the great qualities of both.

When you first taste Zombie Kush, you’ll immediately notice the top notes of lavender and pine, which is followed by complex spiciness and then a base of sweet earth.  As you would expect from the genetics, the deep, hash spices predominate, but you can also detect the zingy, pepperiness of the Haze side.  The aroma could pass for incense or a top-quality scented candle.

There’s 18% THC, which puts Zombie Kush towards the upper end of what you’d expect from an Indica dominant.  That’s certainly enough to provide noticeable pain relief and to give an quick and effective lift out of negative emotional states.  You will, however, want to leave yourself plenty of time to enjoy Zombie Kush because the initial lift gently ebbs into a warm and relaxing body stone.  In other words, this is a great strain to use when you just want to put pain and negativity out of your body and mind and settle down for a good night’s sleep.

Even though Zombie Kush is part Haze, it grows in the classic Indica Christmas tree shape.  Indoors it can stay as short as 80 cm and even with space to stretch outdoors, it’s highly unlikely to grow beyond 1.2M.  It also looks almost as pretty as a Christmas tree as its leaves turn purple and grame its deep green buds with their orange hair and trichomes which glitter like new frost.  Indoors, Zombie Kush will needs 8 to 9 weeks of flowering time and can yield up to 400g/m2 and outdoors it will be ready to harvest  around the end of September or start of October and can yield up to 450g per plant.

At heart, Zombie Kush is still a Kush, which means it’s robust, hardy and beginner-friendly.  While its compact size will obvious appeal to people with limited growing space indoors, the fact that the Kush family takes its name from the Hindu Kush mountain range, which is a cold and harsh environment is an encouraging sign for anyone thinking of growing it outdoors.  Kush strains are very close to their landrace origins so they typically have good resistance to mould, diseases and pests and can cope with typical beginner mistakes such as overwatering and overfeeding.