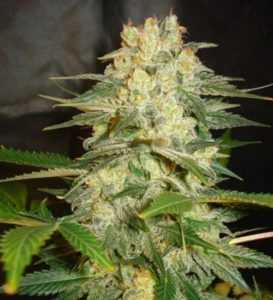 Officially, Afghan Kush Ryder is a hybrid of Afghan Kush and an unknown Ruderalis.  Given the name, it would seem a safe bet that the Ruderalis was Lowryder and Afghan Kush is definitely a cross between Hindu Kush and a genuinely unknown Indica.

In terms of flavour, Afghan Kush Ryder has combines the spiciness of Kush with the sweetness of sandalwood.  It’s easy to detect notes of aniseed and pepper.  The aroma is very similar to incense in its warm spiciness although it’s rather more robust since it has undertones of sandalwood and freshly-turned earth.  Even so, it’s still fairly light and once it’s made its presence felt, it quickly disappears without trace.

Afghan Kush Ryder has 22% THC, which is more than some of the best photoperiod strains around at the moment and is exceptionally impressive given that it’s short, quick and autoflowering.  It’s certainly more than enough to provide fast and effective pain relief and to pull you out of negative emotional states and into a euphoric, refreshing high.  At heart, however, this strain is still an Indica dominant and so as time passes, your high will lower its gears until it finally turns into that wonderful Indica full-body stone which relaxes both mind and muscles.  Overall, Afghan Kush Ryder is best kept for night-time use and is great for dealing with any pain or mental issues which are stopping you from getting the sleep you need.

Even though its THC level is high, Afghan Kush Ryder itself is one of the shortest strains around.  Indoors it can stop as low as 40 cm in height entirely of its own accord.  Outdoors it can grow to double that height, but is highly unlikely to grow any higher than 80 cm.  In either case it will finish its complete grow cycle in just 8 weeks (that’s seed to bud).  Indoors you can expect up to 400g/m2 and outdoors up to 35g per plant.

In general, Afghan Kush Ryder is the sort of strain which would make the perfect choice for a total beginner’s first grow.  Really unless you actively set out to destroy your plants, you are pretty much guaranteed some sort of crop regardless of what you do on your way to learning the basics of watering, feeding, pH and basically anything else.  Its vigour, robustness and resilience to mould, diseases, pests and challenging climates make it a great choice for anyone looking for a quick, “no hassle” grow.


One comment on Afghan Kush Ryder – World Of Seeds