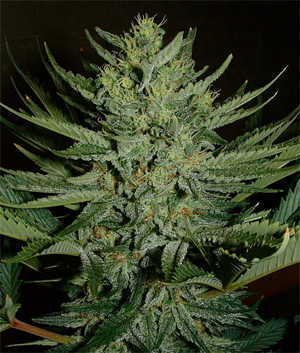 As you’d expect, Afghan weed comes from Afghanistan making it an Indica dominant strain. Originally, it would have been pure Indica but clever Dutch breeders have refined the strain, crossing it with modern Skunk types so that the current version contains some Sativa genetics.

Afghan cannabis has a strong aroma and flavour of hash when smoked and you’ll also be able to detect a rich, sweetish taste with skunky tones. The stone is characteristically Indica meaning it has an intense initial rush followed by a lengthy period of couchlock. This weed helps with sleep problems, stress and muscular pain.

Afghan seeds produce a short, bushy plant rarely exceeding a height of one metre, with a high blossom to leave ratio. The leaves or on the stubby side and the plant grows with a fresh green colour, darkening up as it matures. Buds are dense and exceptionally sticky and the THC content varies from 10 to 15 percent.

With its heritage of growing wild in the mountainous regions of Afghanistan, this plant is hardy and is well suited to growing outdoors in regions with cooler climates like Holland and the UK. Afghan is also resistant to mould, even in damp climates. Outdoors, you can expect to harvest around 600 grams per plant at the end of September or the beginning of October.

Indoors, this strain can be grown in soil or hydro using the SOG method, giving yields of up to 400 grams per square metre.

If you enjoy a smoke that’s strongly reminiscent of hash in both flavour and effect, Afghan weed is a good choice. It’s highly recommended for growing outdoors, even in places that don’t enjoy dry, hot summers.