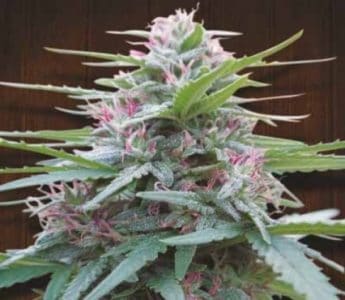 Panama Red was once a superstar marijuana strain and much loved by the old-school marijuana community of the late 1960s to the early 1990s. Then it began to fade, quietly, out of sight, pushed out by compact, quick-growing Indicas, the modern forms of which could match and even surpass it for THC content. Now, however, it’s making a comeback as people come to understand that there’s more to quality than high numbers.

Even though it’s a pure Sativa, Panama Red has a relatively modest THC content of between 10% and 16%. While this may not sound like much by modern standards, it’s actually plenty for a wide range of conditions both physical and mental.  You get the sort of buzzy, cerebral euphoria and motivational energy you’d expect from a classic Sativa, just at a gentler level than the modern strains which have been created specifically for super-high THC content.  There’s about 0.3% CBD to go along with it, which is enough to give a lovely, light, pleasant stone without leaving you couch-locked for hours.  While these characteristics suggests Panama Red is really a daytime strain (and we suspect this is how most people will use it), we think it would be perfectly feasible to use this strain at night.  There are better strains out there if insomnia is your main reason for needing marijuana, but if you just want a flexible strain which can help you to clear your head before you go to bed, then this could be a good choice.

There are a few reasons why we’ve classed Panama Red as being moderately difficult to grow.  First of all, it’s a photoperiod strain.  Secondly, it’s a tall strain, expect plants to grow to at least 1.8M indoors and over 2M outdoors.  Thirdly, it has a much longer growing time than many modern strains.  Indoors, you’re looking at 11 to 12 weeks of flowering and outdoors, you’ll be collecting your harvest in early to mid-October.  What’s more, even though Panama Red is tall, the yield is only medium.  Indoors you’re looking at up to 450g/m2 and outdoors up to 450g per plant.  On the plus side, this strain is very robust and is about as low-maintenance as you can reasonably expect from anything which grows this big.

In brief, Panama Red is very much a connoisseur’s strain.  Those in the know appreciate not only its effects but also its delicious flavour and aroma, which combine the sweetness of tropical fruit with the freshness of citrus, especially grapefruit along with notes of exotic herbs and spices.