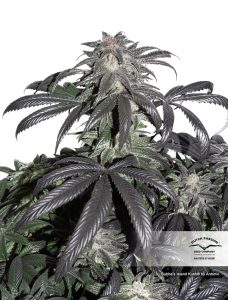 Bubba Island Kush was created by crossing a Grandaddy Purple x OG Kush hybrid, with a pre 1998 Bubba Kush reverted male.  Although its lineage suggests that it is best used for making concentrates, the taste makes it a great candidate for smoking and/or vaping.

Even though Bubba Island Kush is close to pure Indica, it still has a very reasonable 20% THC. This is more than enough to bring prompt and meaningful pain relief, to a wide range of medical conditions.  It will also give you a welcome lift out of some dark mental places. Although this is more in the line of an emotional lift rather than a full-on high.  For all its THC, Bubba Island Kush is still almost pure Indica. So although it delivers a feeling of upbeat positivity, it does so in a way which is much calmer and more chilled.   After the head buzz ebbs gently away, you’ll find yourself dipping into the warmth and relaxation of a classic Indica full-body stone. Which is what you’d expect from a good Kush strain.  Bubba Island Kush is a clear candidate for night-time use and with its genetic lineage it’s hardly a surprise that this strain is popular as a treatment for insomnia.

Bubba Island Kush has an indoor flowering time of just 7 to 8 weeks and an outdoor harvest period of late September.  While Dutch Passion has not released any figures relating to yield, feedback from users suggests that indoors yield can vary from as little as 250g/m2 to as much as 500g/m2. Outdoors, yields can reach as much as 750g per plant.  There are two reasons for this difference.  The first is that Bubba Island Kush has a growing range of between about 1M and 1.5M with indoor plants tending to be on the smaller side.  Taller plants outside, of course, have more space for more bud.  The other factor which can and often does influence yield is the experience of the grower.  People who know their way around the likes of sea-of-green set-ups and plant training can expect to collect more bud than those who are just starting to learn their way around marijuana.

The good news for both novices and experienced growers is that overall Bubba Island Kush is a really straightforward strain to grow.  Total beginners with no experience of gardening might want to start with an autoflowering strain. But if you’re confident with managing light cycles or have an appropriate outdoor growing space, then it’s very hard to go wrong with Bubba Island Kush.  What we mean by an appropriate outdoor growing space is one in which your plants can be kept out of the wind and rain. Also given maximum possible exposure to warmth and sunlight.  You’ll  want to make sure your plants’ odour will not disturb any neighbours.

Speaking of odours, while the aroma of Bubba Island Kush is very much about the Kush, there are also elements of fruit, particularly citrus.  This is a good indicator of the taste, which is based on the sweet robustness of earth and hash. But is balanced by fresh fruitiness and has a definite citrus tang.