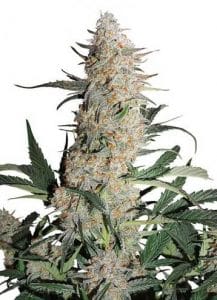 Critical Orange Punch by Dutch Passion is a three-way cross between Grandaddy Purps, Orange Bud and Kritikal Bilbo, sometimes known as Critical Bilbo.  It’s easy, vigorous and stable with plenty of THC and a mouthwatering taste.

Even though Critical Orange Punch is an Indica dominant, it still has a whole 20% THC. More than enough to tackle even higher levels of pain and to pull you out of darker emotional states.  The Indica genetics mean that the head buzz is relaxing and refreshing, upbeat to the point of euphoria but not massively energetic.  As the effect of the THC wears off, you transition seamlessly into a light body stone. Bringing exquisite rest and relaxation to both mind and body.  For all its Indica genetics, Critical Orange Punch is actually quite low in CBD.

What is known for sure is that Critical Orange Punch has a growing range of about 1.3M (indoor minimum) to 2M (outdoor maximum), with an average indoor height of about 1.5M.  It will adapt happily to a number of indoor growing conditions, so those in a hurry could step up the pace with a hydro set-up  Those looking to push up yields to the absolute maximum could go for sea-of-green or screen-of-green.  Critical Orange Punch is equally happy outdoors, provided that you can find it a warm, dry, sunny growing location.  Outside of the Mediterranean basin, growing under glass may be a cost-effective compromise.

Indoors or outdoors Critical Orange Punch is robust and stable, although vigorous, it’s not particularly greedy for nutrients. As long as you stay on top of ventilation, you’re unlikely to have any problems with mould, or diseases or pests.  Odour control, however, will become a necessity later on in the flowering period.

Speaking of odours, if you went purely by the aroma of Critical Orange Punch, you’d probably think it was a Kush, there’s so much emphasis on hash spices.  In terms of taste,  it’s more of a combination of skunk and citrus. Although you can still taste the warm spiciness.

Critical Orange Punch - Dutch Passion, 4.7 out of 5 based on 3 ratings