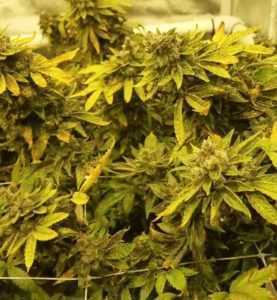 Critical Kush has the benefit of some really outstanding genetics behind it as it is a cross between two massively popular strains, Critical Mass and OG Kush.  Although it’s based on long-established genetics, it’s very much a “new-school” Indica dominant, which combines plenty of THC with the classic Indica body stone.

The taste is also classic, it is true, old-school Kush, blending hash spices with the sweetness of wood and freshly-turned earth – with just a touch of pungency.  As you would expect from the flavour, the aroma is robust and hearty but the smoke itself is still nicely gentle on the throat.

With a hefty 20% to 25% THC, Critical Kush is quick off the mark when it comes to dealing with physical pain and mental conditions such as stress and depression.  It delivers a clean, positive and refreshing high, which will gradually transition into a warm and soothing full-body stone.  It’s a great option when you need a strain which takes effect quickly but keeps going over the long term, for example before bedtime.

Even though Critical Kush has the sort of THC you’d expect from a Sativa, it looks and grows like the Indica dominant it is.  Left to its own devices, it will typically reach a height of between 1M (indoor minimum) and 1.1M (outdoor maximum) and if even this is too much for your growing space, it’s happy to respond to plant training.  Indoors it needs about 8 to 9 weeks of flowering time and will produce up to 650g/m2.  Outdoors it will be ready about the end of September and you can expect to harvest up to 650g per plant.  The reason such a small plant can produce such big yields is because Critical Kush grows outwards rather than upwards, which gives it a nice solidity and means you don’t have to worry about it literally toppling over without support.

Strains with a high percentage of Kush genetics tend to be both robust and hardy and so it is with Critical Kush.  While its short height points to indoor growing, it’s actually perfectly happy outdoors and is ready early enough to be a feasible option for people in more northern climates.  It’s a great choice for beginners since it has a lot of resistance to mould, diseases and pests, which makes it possible to focus on learning the basics of growing marijuana.  It’s also pretty forgiving of common beginner errors such as overwatering.