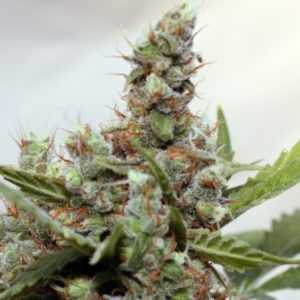 As its name suggests, CBD Blue Shark is an Indica dominant with the medically-beneficial 1:1 CBD:THC ratio, having around 6.5% of each.  This is a shark which can take a real bite out of pain without either sending you into the stratosphere or leaving you locked to your bed like Anastasia Steele.

In terms of taste CBD Blue Shark has a solid base of earth and wood, but the top notes are of citrus fruitiness, with many people noting jasmine and some people noting pine. The aroma tallies with this, being pleasantly fruity.

The effect of CBD Blue Shark is everything you’d expect from a high-quality medical strain.  Approximately 6.5% THC is enough to give a hit of fast-acting pain relief without sending you so high you think you can fly.  Similarly 6.5% CBD is enough to ease off aches and pains while still leaving you capable of being able to function in general terms, obviously we’d suggest you apply a bit of common sense here.  Doing a bit of housework, office work, shopping or whatever will probably be absolutely fine.  Driving, using sharp objects or power tools and such like is unlikely to be a good idea, in fact it’s probably a really bad one.  In other words, CBD Blue Shark is an effective but “light touch” treatment for the relief of conditions such as mild pain, nausea, insomnia and depression and can also be used to stimulate the appetite.

CBD Blue Shark is a good choice for anyone looking to grow their own prescription.  It’s fairly compact, generally maxing out at about a metre, although it can be kept far shorter by the use of plant training.  Yields are more than acceptable for such a small plant, coming in at about 400 – 500 grams per m2.  Part of the reason for this is because CBD Blue Shark does have a fairly lengthy grow time for a plant of this sort of size, coming in at 9 to 10 weeks.  This means that outdoor harvest time is usually around the start of October, which is why CBD Blue Shark is a bit of a challenge for those who want to grow completely outdoors in that it can easily be savaged by autumn frosts.  Having said that, given that CBD Blue Shark is, generally, a pretty hardy strain so those with limited space indoors could split the difference and start their plants out of doors before bringing them inside, or at least into a greenhouse, before autumn frosts become a danger.  CBD Blue Shark is known for its resistance to mould, which is a definite plus to indoor growers, but the strain still needs proper ventilation.