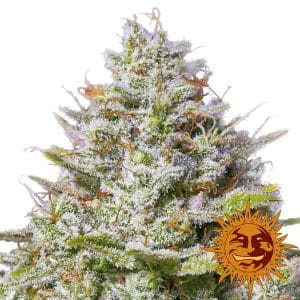 The original Gelato was a cross between Thin Mint Girl Scout Cookies and Sunset Sherbet. Blue Gelato 41 adds Blueberry to the mix, hence the name.  Although it’s a fairly new strain, its quality has been winning it plenty of fans.

Although Barney’s Farm has not released any official information on THC figures, based on the parentage, we think Blue Gelato 41 to have 20% to 24% THC.  This strain is only slightly Indica dominant (60/40) and so the overall effect is an enjoyable blend of Indica and Sativa. The head high transitions smoothly into body stone. The high has all the upbeat creativity you’d expect from a quality Sativa. But the Indica genetics bring a calming touch so that the high is pleasant and refreshing.

Blue Gelato 41 has an indoor flowering time of 9 to 10 weeks and an outdoor harvest period of mid/end October.  Like most marijuana strains, Blue Gelato 41 does best in climates which are warm, sunny and dry. So outside of the Mediterranean basin, you’ll have to look for an outdoor growing location which has good protection from the elements, or put your plants under glass.  Once your growing period is finished, indoor growers can look to collect up to 700 gr/m² and outdoor growers up to 3Kg per plant.

As long as you can keep Blue Gelato 41 in the warm and dry, you can look forward to a straightforward grow.  One important point is that the Sativa genetics do push the height up a bit. Blue Gelato 41 has a growing range of between about 1.5M (indoor minimum) and 2M (outdoor maximum).  In terms of shape, it leans towards Indica bushiness rather than Sativa branchiness, but it still needs a decent amount of space to spread out.  Overpack your growing space and you’re basically setting yourself up for an attack of mould.  On the other hand, if you do keep on top of your ventilation, then you’re highly unlikely to have any problems. The landrace genetics in this strain’s background make it nicely robust and able to fight off mould, diseases and pests.  Overall, we’d probably point complete beginners to another strain. If you’ve already grown an autoflowering strain and are ready for a bit more of a challenge, Blue Gelato 41 could be a very rewarding choice.

We can’t resist the temptation to describe Blue Gelato 41 as tasting a bit like good blueberry muffins.  There’s an earth baseline, topped off with the fresh sweetness of berries, especially blueberries, and citrus.  The aroma is more fruity than earthy, but not overpoweringly so.