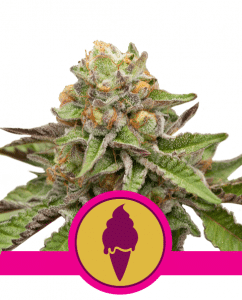 Green Gelato has the same genetic background as the original Gelato, namely Sunset Sherbet and Thin Mint Girl Scout Cookies. However in this case there’s a bit more emphasis on the latter, hence the change of name.

This strain is slightly Indica dominant (55%) but still provides an impressive 25%+THC.  One of the particularly interesting features of Green Gelato is that the balanced genetics also produce a balanced high.  In other words, the energy rush and euphoria of the Sativa side of the parentage, is balanced out by the mellow serenity of the Indica side. This means that the overall effect is rather more chilled than you might expect given the THC level. The pain-busting power remains the same and if it’s emotional relief you need then this strain is also an excellent choice.  On a similar note, the classic Indica body stone is lightened up by the Sativa genetics.  So you’re unlikely to find yourself couch locked for hours on end.

Green Gelato has an indoor flowering time of 8 to 10 weeks and an outdoor harvest period of early October.  In principle, it will be equally happy indoors our outdoors.  In practice, how happy it will be outdoors will depend entirely on your weather.  Anyone in the Mediterranean area should be fine.  As you go further north, however, then you might want to look at growing under glass or even just bringing the strain indoors.

Even though Green Gelato has a high percentage of Sativa genetics, it doesn’t necessarily grow particularly tall.  Indoors, you can expect it to grow to a height of anything between 0.8M and 1.2M. While outdoors you can expect it to be a bit taller, anything from 1.5M to 2M.  Obviously smaller plants have less space for bud and hence produce smaller yields. A reasonable expectation for indoor growers would be anything from 500g/m2 to 700g/m2. Outdoor growers could collect up to 800g per plant, if they let their plants stretch as much as they want.

The grower’s experience will also play a role here.  The only reason we’ve classed Green Gelato as moderately difficult to grow is because it’s a photoperiod strain.  Otherwise, it’s very robust so even total beginners should be able to collect a decent harvest. If you are aiming for maximum yields then you’re going to have to look at plant training.

In terms of flavour and aroma, Green Gelato balances top notes of sweetness and citrus with an earthy baseline.