Utopia Haze is far more than just a strain to get the party started. While its genetics are open to guesswork, it is known to be almost pure Sativa and to have a high percentage of landrace strains in its pedigree. This means that it is a robust plant, which creates high-quality, great-tasting weed. 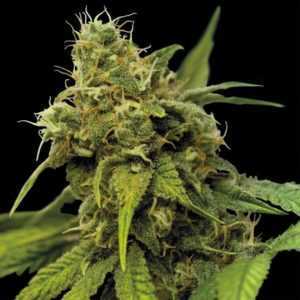 Barney’s Farm has never released details of Utopia Haze’s breeding. Most sources agree that Utopia Haze has its origins in Brazil and includes significant landrace genetics. One source suggests it is a cross between Grass Dream and a Brazilian Sativa. Another source suggests it is a pure landrace strain with Afghani, North Indian and Mexican genotypes. Whatever its origins, this is an award-winning strain, with excellent flavour and medical effectiveness.

While this is definitely a fruity weed and the overall taste is sweet, there are clear notes of lemon and mint, which bring a tangy freshness to the flavour and stop the sweetness from becoming cloying along with a herbal element for body, strength and completeness. The aroma has sweet and fruity top notes, but there are herbs and spices to add interest and the base is earthy and woody.

For practical purposes, this is an old-school Sativa with around 18% to 22% THC for effective pain relief together with a crisp and refreshing cerebral high. What’s particularly attractive about this Utopia Haze is that the high is both energetic and relaxing. In other words, your mood will be lifted and you’ll feel yourself recharged, but also chilled. Its nothing like a full-body Indica stone, but it is wonderfully tranquil and soothing. This means that although Utopia Haze is generally used as a daytime strain, if you do want or need to use it at night, you should be fine for getting to sleep. Utopia Haze is particularly recommended for headaches and migraine and is also used for glaucoma, arthritis and general pain relief.

Utopia Haze is about as grower friendly as can reasonably be expected of a Sativa. To begin with, it stays on the shorter side, maxing out at under 1.5 metres. It’s also very unfussy about its general growing conditions and will be perfectly happy in soil or hydrophonics indoors or outdoors although the fact that it takes 10-11 weeks to flower means a mid-/end-October outdoor harvest, which means autumn frosts have to be a consideration. On the plus side, Utopia Haze is known for its resistance to mould and pests, although growers still need to ensure that there is adequate ventilation. Branches are strong and produce many bud sites. Buds may look small, but they are dense and hence yields are very high (in the region of 550g/m2). They are also covered with resin. As is often the case with Sativas, Utopia Haze is likely to need some support during flowering and also likes its food. Overall, however, even absolute beginners should be able to grow Utopia Haze successfully as long as they recognize that this sort of strain requires a higher commitment of time and effort than the likes of autoflowering Indicas.