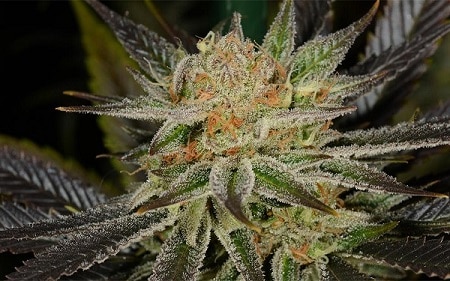 We’re big fans of puntastic names and Jillybean is a nice pun on the breeder MzJill Genetics and the fact that this strain tastes rather like a well-known brand of sweets. The parent strains are Orange Velvet and Space Queen.

Although Jillybean is technically Sativa dominant (albeit only just at 60%), it has a fairly moderate THC level of between 15% and 18%. This is still quite enough to deal with a wide range of medical conditions. It’s also worth noting that although this is probably the sort of THC level you’d expect from a modern Indica dominant, Jillybean is genuinely a shrunk-to-fit Sativa-dominant, rather than an Indica in disguise. In other words, the head high is full of the bubbly euphoria you’d expect from Sativas and packed with inspiration and motivation. It’s rather milder than many other Sativas/Sativa dominants, partly because of the moderate THC and partly because the Indica genetics do act to keep it all grounded. Having said that, there’s only about 1% CBD and although this would generally be enough to deliver a very deep, couch-locking, body stone in a strain with a higher level of Indica genetics, with Jillybean, the Sativa genes make everything a bit lighter, but still very relaxing. All in all, therefore, this is a strain you can use at any time of day, although you will need to be careful to allow sufficient recovery time before undertaking anything complicated.

Indoors, Jillybean needs around 9 to 10 weeks of flowering time, but will stay relatively compact, i.e. in the region of about 0.75M and will deliver a crop of about 250g/M2. Outdoors, it will be ready around the end of September, may grow and bit taller and will deliver a crop of about 350g per plant. While these yields may not sound impressive on their own, they are actually pretty good for such a compact plant. Jillybean will grow perfectly happily outdoors in a warm, dry and sunny climate, but is equally well suited to growing indoors, where its compact stature is generally a distinct advantage. We’ve classed this strain as being moderately difficult to grow partly because it’s a photoperiod strain and partly because its indoor grow time is on the longer side, by modern standards. It does, however, have good resistance to mould, diseases and pests.

When it comes to flavour, Jillybean is just full of tropical fruit goodness with particularly strong notes of oranges and citrus. This is reflected in the aroma which also has notes of mango.