Quick Critical+ is another super-speedy, not-quite-automatic strain from Dinafem.  It’s a cross between the original Critical and Critical + 2.0 Auto. 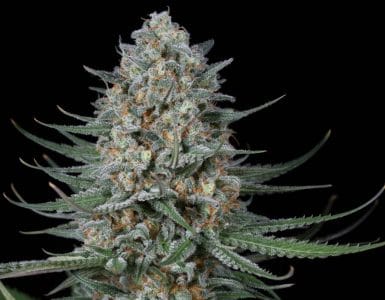 With average THC of between 16% and 20%, Quick Critical+ is at the upper end of what you would expect from a modern, photoperiod Indica dominant (75%).  As this strain is a whole 75% Indica, the head high is more about blissful serenity than energy-blazing euphoria. However it can still pull you out of negative emotional states and the pain-relief is exactly the same as you would get from a Sativa with an equivalent level of THC.  The head buzz will ease gradually into a full body stone, so we’d recommend keeping this strain for night-time use.

Quick Critical+ has an indoor flowering time of just 6 to 7 weeks and an outdoor harvest period of mid September.  It will grow equally happily indoors and outdoors and its relatively early harvest period makes it a feasible choice for growing outdoors towards the northern end of Europe, although you will still need to look for a planting site which offers a decent level of protection from the elements.

The surprising news about Quick Critical+ is that even although it’s three quarters Indica dominant, it actually grows very much like a Sativa.  That basically means big plants with big yields.  Indoors, this strain tends to reach the upper limits of modern photoperiod Indicas, so think a good 1.5M to 1.8M.  You can use plant training to bring this down a bit, but this is what you should expect if you simply leave your plants to grow as they wish indoors.  Outdoors, this strain can easily grow as tall as 2.5M.  The good news is that big plants tend to have big yields, hence indoor growers can expect up to 600g/m2 and outdoor growers up to 1.25 kg per plant.

We’ve classed Quick Critical + as moderately difficult to grow partly because it is a photoperiod strain and partly because of its height.  Big plants do mean big yields, but they also mean big appetites and growers need to be prepared to satisfy them.  On the plus side, this strain doesn’t just grow to the height of a Sativa, it also has the Sativa shape, which makes it easier for light to penetrate and assists with airflow.

In terms of taste and aroma Quick Critical + resembles the original Critical + and has a skunk base topped with citrus top notes.