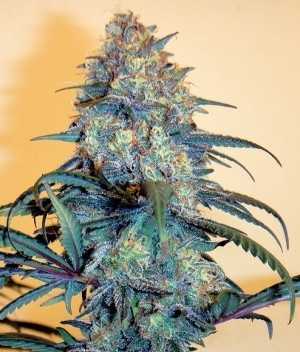 The Indica dominant Critical #47 weed was created by crossing the Critical Mass and AK 47 strains. AK 47 has taken places in various sections of the High Times Cannabis Cup over the years, and Critical Mass is a hybrid with genetics from Skunk #1 and an Afghani Indica. The Critical #47 strain was developed by Positronics Seeds, a company that started life in the Netherlands but is now based in Spain.

Critical #47 weed has a subtle taste with pleasant notes of exotic fruit set off by a hint of vanilla. The smell is quite pungent and skunky, with undertones of sweetish hash. The high is powerful with a strong body stone combined with soaring cerebral effects. Medical practitioners recommend this weed for insomnia, poor appetite and pain relief.

The Critical #47 strain produces multi-branched plants that grow to about 150 centimetres tall with dark, jungle-green leaves with deep serrations. The plants have a profusion of heavy buds which can sometimes threaten to break the rather slender stems. THC content ranges from 15 to 18 percent.

Its Indica genetics make it quite hardy and it can be grown outdoors, even in cooler climates. Indoors, it responds best to growing in soil. Flowering time is seven to eight weeks and the plants are ready to harvest outdoors by the end of September. Prune the leaves of the plants after about three weeks of flowering to encourage bud development. Indoor yields are around 400 grams per square metre while each plant will produce about 500 grams when grown outdoors.

Critical #47 produces dependable crops and a quality weed distinguished by its potency and its fruity flavor. It’s not hard to grow, and you’ll get the most out of it with a minimum of fuss. One word of warning: as it grows, the crop has a very strong aroma, so take care if you have over-curious neighbours.