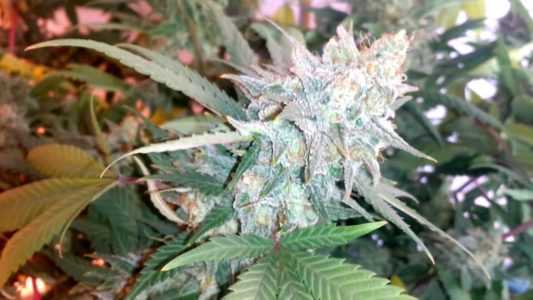 Piece of cartoon trivia,  in the original Smurfs cartoons, smurfberries were actually red and were one of the two main foodstuffs eaten by the Smurfs (along with sarsaparilla leaves).  The Smurfberry marijuana strain by Sagamartha Seeds is neither red, nor particularly nutritious, but it’s still a decent variety of weed.

If you’re looking for a clue as to why by Sagamartha Seeds chose this name for this strain, then remember that the Smurfs themselves were blue.  Smurfberry is a blueberry-flavoured marijuana strain and unlike some of its competitors, it is basically blueberry all the way in both taste and scent.  There’s no grounding baseline of Kush or Diesel.  We personally find it a bit on the sweet side, but it’s all a matter of taste (literally).

Interestingly, we’ve been unable to find any THC data for Smurfberry, but we do know that Smurfberry is based on Sagamatha Blueberry (also known as Blueberry Bud) with the addition of Soloryder to make it autoflowering.  Sagamatha Blueberry had THC levels in the region of 22% to 24%, but when photoperiod strains are developed into autoflowering ones, they tend to lose some of their THC content, so we’d suspect that Smurfberry has around 19% to 21% THC.  The medical effects are in line with Sagamatha Blueberry.  You get a very quick and euphoric head high, followed by a warm, soothing body buzz.  Overall this strain is more for the daytime than the evening, but if you did need to use it towards bed time, you should still be able to get a decent night’s sleep, in fact the relaxation may even help.  If, however, you’re looking specifically for an insomnia treatment, we’d strongly recommend you look elsewhere.

The big downside to Smurfberry is that it’s yield is nothing to write home about by modern standards.  Realistically, you’re looking at a maximum of 300gr/m2 and that’s assuming you give the plants absolutely optimum conditions and understand how to organize high-density growing.  To put this in context, beginners could easily achieve at least as much yield with many of the other autoflowering strains on offer these days (including ones with high THC) and more experienced growers who’ve learned their way around SOG and/or SCROG can achieve massively bigger harvests with the vast majority of strains on the market today.  Because of this, the only reason we can think of for choosing Smurfberry over the many other blueberry strains on offer is if you really love its particular taste.