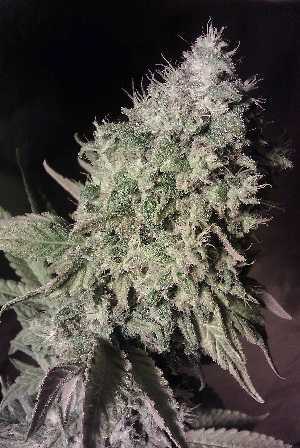 The Blueberry Widow strain is an Indica dominant weed which has inherited many of the traits of its exceptional parents; White Widow and Blueberry. Both parents have taken a collective four awards at the High Times Cannabis Cup. This impressive heritage definitely shines through in what can on be described as an exquisite connoisseur’s flavour.

Developed with the flavour in mind, the aroma is of fruity bubblegum, which comes through clear in the smooth smoke. The stone comes on fast, is initially euphoric and uplifting, progressing into a more sedative feeling which lasts a couple of hours. Medicinally, this strain is good for treating headaches, nausea, loss of appetite and mild pain.

The Blueberry Widow strain grows to a medium height if kept indoors, but can stretch to 3 metres tall in the right outdoor environment. The buds increase rapidly during the last couple of weeks of growth, almost doubling in size. As the plant matures, it takes on purple, blue, and red hues that, due to a thick layer of trichomes, look like they are covered in snow. The THC content has been measured as high as 16%.

Indoors, its explosive upward growth and rapid flowering time makes it an ideal candidate for a SCROG setup. It will thrive in both hydroponics and soil, with the former producing bigger yields, and the later accentuating the intense fruity flavour. In optimal conditions, growers can expect between 400 and 500 grams per square meter.

Outdoors, this weed strain excels in areas with plenty of warm summer sunshine, somewhere with a climate akin to the Mediterranean. The plant is resistant to mold so is perfectly suited to outdoor growing. It has a short flowering time, between eight and nine weeks, and harvests in the northern hemisphere come in early October.

This Blue Widow review recommends this weed if you’re a connoisseur looking for an aromatic and fruity weed that’s full of flavour and has stacks of bag appeal. You should also take this fast finishing and easy to grow weed into consideration if time is an issue.

Blueberry Widow Review, 4.3 out of 5 based on 9 ratings