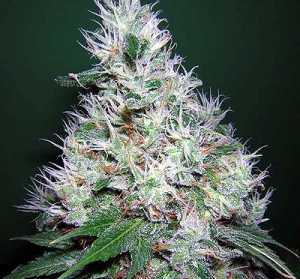 Bubblegum weed is said to have originated in the American Midwest state of Indiana before finding its way to the Netherlands in the early 1990s. The strain is an Indica and Sativa hybrid, with the Indica genetics slightly to the fore. Its unique quality is its distinctive flavor, akin to pink bubblegum. In 1994, Bubblegum won second place in the overall High Times Cannabis Cup, second place in the Hydro section and third place in the Bio section.

When you smoke the Bubblegum strain, you’ll notice the sweet, bubblegum flavor and aroma right away, followed by an aftertaste that’s fruity and slightly sugary. Initially, you’ll feel a euphoric rush which soon turns to a heavy stone as the Indica influence kicks in. Medical users turn to Bubblegum because it offers relief from pain, nausea and insomnia, and helps to increase appetite.

The Bubblegum weed plant grows to a height of between 100 and 120 centimetres with sturdy side stems and a profusion of compact buds covered in glittering THC crystals. The broad leaves are medium-green with a reddish hue and the buds have a THC content ranging from 15 to 20 percent.

Bubblegum seeds do best when grown indoors in a hydro or soil medium using a SOG set-up. Flowering time is eight to nine weeks and yields can be as high as 450 grams per square metre.

You’ll need to choose a sheltered, sunny spot to grow it successfully outdoors. Harvest time should come around late September or early October.

Connoisseurs choose Bubblegum weed for its appetisingly sweet flavor, potent stone and good yields. Experienced growers should have no trouble cultivating this weed, but beginners need to take extra care to get the best out of the strain.